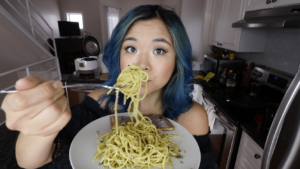 Do those words pop into your mind when someone says ‘vegan’?

Well, you obviously haven’t heard of the Cheap Lazy Vegan.

Rose is the Cheap Lazy Vegan. With over 450,000 youtube subscribers, she’s doing an amazing job at spreading the word that vegan doesn’t have to mean complicated or expensive.

She makes vegan easy and attainable. If you’re still skepticle… watch one of Rose’s youtube videos showing the ease of delicious 10 minutes meals, and you’ll be blown away at the simplicity of it all.

Along with being a youtube star, she now has an all vegan café (SaVeg Café) in Calgary, AB.

To celebrate National Vegetarian Week, it’s the perfect time to get to know Rose and bring some inspiration to you guys for cheap and easy vegan meals!

I was lucky enough to stop by the new café with my glorious Grandma to meet this beautiful soul! We also met her Mama who cooked up an amazing Tofu Sweet Potato Korean dish and a super spicy soup that we easily polished off (so dang good).

Let’s get to know Rose.

Hooked On Plants: Cheap Lazy Vegan resonates with hundreds of thousands of people now!  What was your first youtube video about?

Cheap Lazy Vegan: The first video I did was a simple introduction of my channel where I explain that you can be cheap AND lazy on a vegan diet… along with a “What I Ate in a Day” where I showed viewers some easy, simple meals that I ate in a day.

HOP: Did you come up with the awesome name, Cheap Lazy Vegan? Is there a story behind that?

CLV: I did… I had just moved to London, UK at the time and I was making very little money but spending a lot simply because I was living in one of the most expensive cities in the world. I found myself buying affordable groceries and making very inexpensive meals. I realized that I was super lazy when it came to cooking. At the same time, I’ve always been a foodie so I always have enjoyed taking photos of food. So I just came up with an Instagram page with the handle @cheaplazyvegan which is how it all started… 🙂 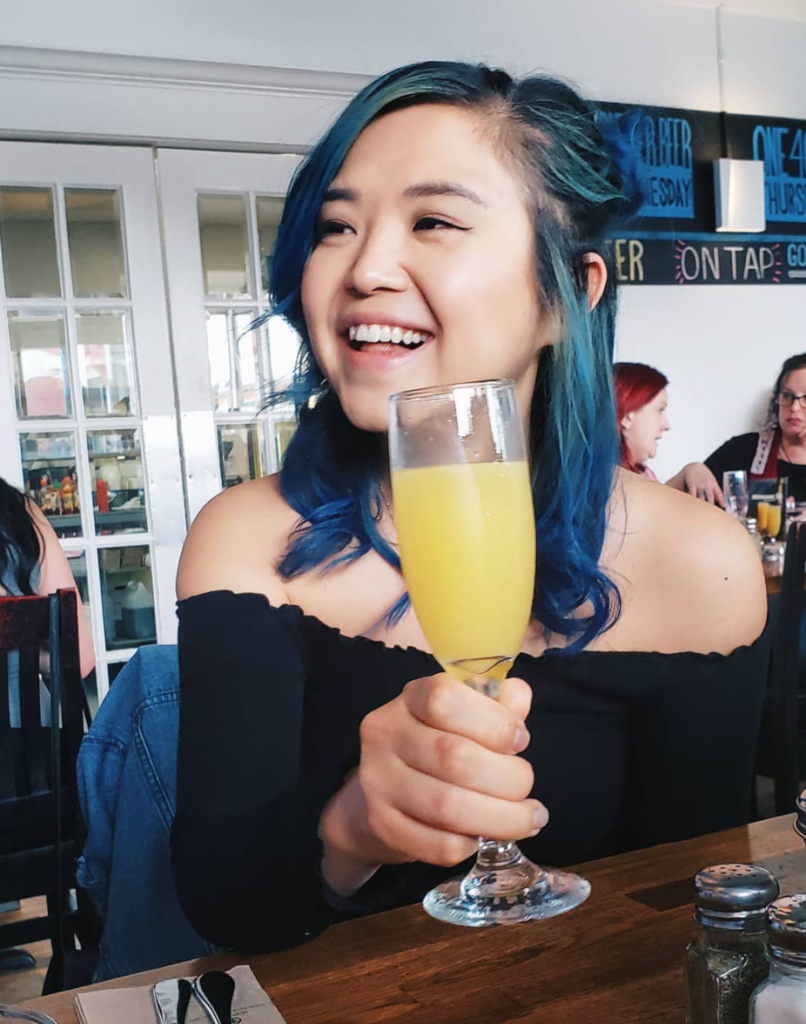 HOP: How long have you been vegan, and what was the main reason? Animals? Environment? or Health?

CLV: I’ve been mostly plant-based for about 7 years total (I became a pescatarian at first, staying away from meat, dairy and eggs, but still had a hard time staying away from fish) and now I’ve been VEGAN for almost 4 years. I went vegan purely for ethical & animal rights reasons and the other stuff (like health and environmental benefits) were just little bonuses for me. I read some books and watched some movies, which really opened up my eyes to the realities of what happens to the animals that I claimed to “love”.

HOP: Did you take your time to take animal products out of your diet, or did you go completely vegan overnight?

CLV: It took time. I think it takes time to get used to the dietary aspect but also to mentally get your head around the whole idea. I first gave up meat, then about a month later stopped eating dairy and eggs, then lastly I quit fish, years later. 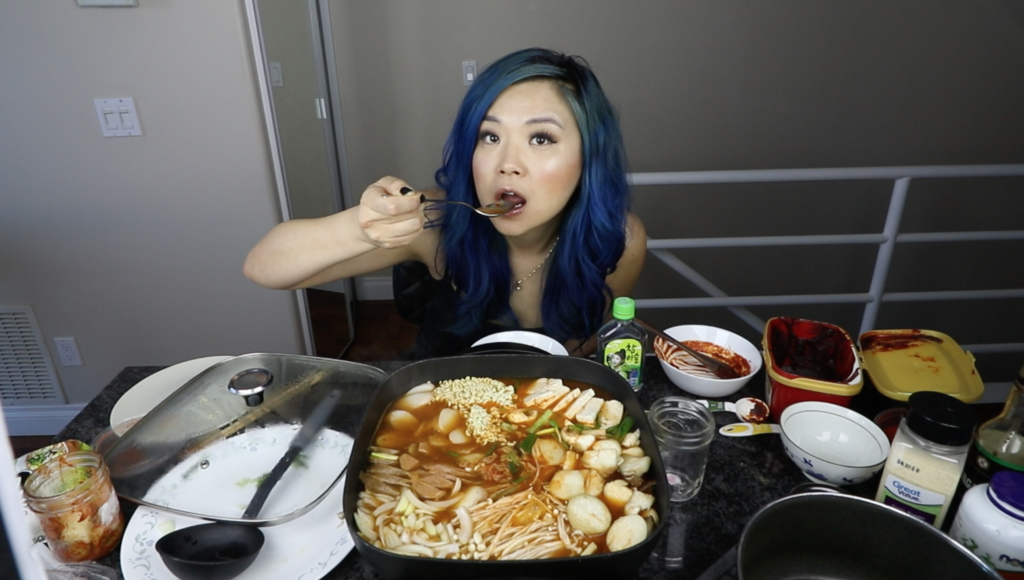 HOP: It is SO exciting that you’ve opened a 100% vegan café in ‘CowTown’! With Calgary being known for it’s Alberta Beef, it’s so it’s so inspiring that you’ve taken the initiative to get more vegan food into people’s mouths! Plus, you’re working with your Mom! How did you come up with the name SaVeg?

CLV: Haha, I really wish I could take credit for the name, but it was actually my friend’s sister that had the idea. I liked the trendiness of the name and the smart play-on-words.

HOP: What was the catalyst for opening SaVeg Café?

CLV: My mom already owned the cafe but it wasn’t a vegan one. I helped out there for just a few hours each day and I felt that my own time and the cafe space could be used in a better way. I wanted to be more involved and help out more, but I knew I couldn’t invest my own time/money/energy in a business that sold animal products. So, I approached my mom about the idea of fully changing the menu and concept of the cafe into a vegan one (and of course, me taking half ownership!). Calgary also is lacking in vegan establishments (in my opinion), so it made sense from a business perspective as well.

HOP: What are you excited about this year? Do you have any other cool projects you’re working on?

CLV: At the moment, I’m trying to juggle doing my social media and running the cafe! I’m focusing on getting the cafe established and learning to manage my time before moving onto other projects. I definitely would like to get involved in some new projects in the future!

I had to share this recipe of hers. These spicy korean tofu bits were the special at her café when we came to visit. They were deeeeeelicious. 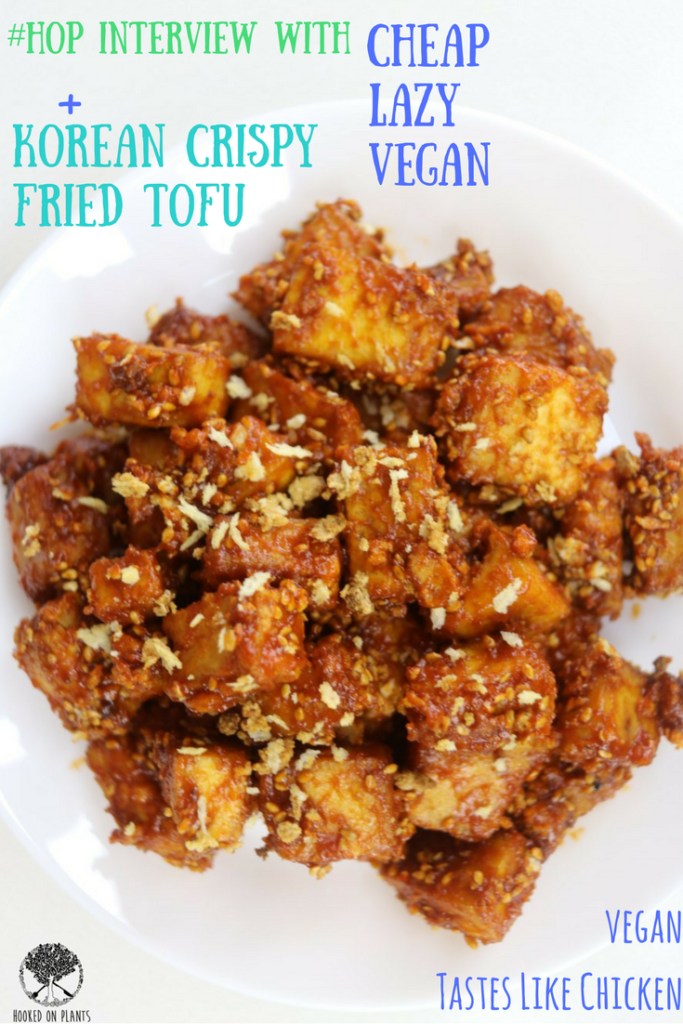 
Sign up to my emails for weekly inspiration, recipes, plus a free PDF on How to Get Hooked On Plants